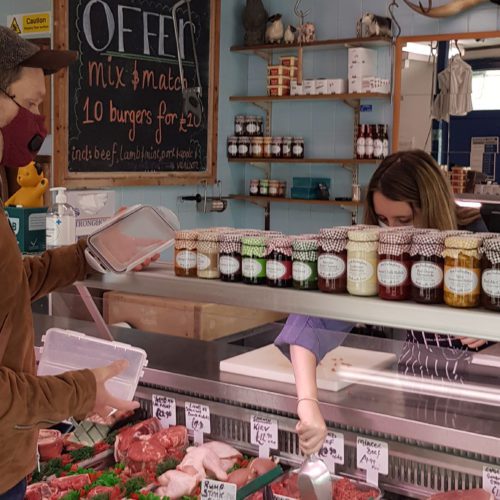 Does less meat = a lower footprint?

Okay so let’s just get the vegan question out of the way. Are we vegan? No. We are not. Many people assume because of our environmentally led lifestyle that we do not eat meat. Some even attack us for it online. Harsh, but they believe that what we are doing is harming the planet. We don’t hold the same views and I will explain why before people start spitting at the screen.

What we believe about eating meat

We choose to eat meat because we feel we benefit from the health benefits of doing so. Richard follows a Keto Diet. Which is heavily reduced carbs. Both of us generally follow this but I’m not a big fan of meat and I’ve never eaten fish so my choices are more limiting if I was going to go strict Keto.

And, I love cake. And bread… For me, my ‘Keto’ is just about eating real food and not consuming all the over processed and packaged food. Richard, although an avid meat eater still has a plate jam packed with plant based food. And for two days a week he doesn’t eat meat at all.

For me, I don’t eat fish or lamb and I rarely eat beef. I’ve only eaten beef when my body needs it. I’ve had long periods of illness in my life and bone broth and beef mince has had healing benefits for me. Bear in mind this is just what worked for me.

I’m about 70-80% vegetarian. This week I’ve only had one meal with meat in. Maybe 1 or 2 that ended up vegan, everything else was vegetarian.

We don’t believe that eating meat is the worst thing for the environment. It’s arguably worse for the animals of course but we will discuss animal welfare in another post. For now I want to focus on being vegan to save the planet. We feel that however good the intentions it is mis guided.

For us it is about staying local to lower our carbon footprint. Other food types are shipped or flown all around the world to get to us. It doesn’t make sense.  Avocados for example. Rice. Quinoa. Most fruit. Our demand for non local out of season produce needs to be looked at.

There is also of a lot of commercially made vegan food that is highly processed and comes in a lot of packaging.  We understand the argument against not eating meat, the industry needs looking at to ensure animal welfare is more of a priority. But as for saving the planet, we believe it is not as black and white as that.

If you want to eat less meat or no meat at all for the benefit of the environment then replacing it with locally grown produce will reduce your carbon footprint. Meat is a luxury, not a staple. Good meat is expensive and a privilege to be able to afford.  Are you really valuing that animals life if you are buying cheap mass produced meat stuffed with god knows what to bulk it out? Do you know where it came from?

This is not to say that if you are in a position where you are financially stuck right now that you should not buy what is available to you. The main point here is that we buy too much of it at low quality. Could we buy less of it and at higher quality? Or more locally sourced fruit and veg until we can get back on our feet.

We believe from watching like Kiss The Ground, and doing our own research that our soil is depleting at a rapid rate and good quality top soil, needed to grow plants – is going to be a thing of the past. What will happen then?

The animals are needed to prepare the soil into a rich nutritionally based environment where plants can thrive. We could just let those animals roam the fields for that purpose but then what? We need to ensure it is as ethical and as natural as possible whilst taking on board that everything has a life cycle and a role to play. If you do want to continue to eat meat then eating locally and better quality will be a good first step.

If you don’t want to eat meat then that is fair enough. I am such a slow eater, if I had to get all my calories from in season locally grown plants alone all day everyday I’d be eating from dawn til dusk. We use our local butcher because at least we know where our meat is from, there is more transparency there then where other food products come from.

If you are vegan and based in the UK and surviving on a locally sourced, plant based, in season diet please get in touch – I’d love to interview you to balance up our content.

To find out more about the meat we buy we interviewed John Hughes. Our local butcher.

If you have read this far our lifestyle choices will be apparent by now.

We wanted to talk to Jackie and John to find out more about the process, where does their meat really come from? Is supermarket meat as legit as we think it is? There is so much to cover so this is the first part of our butcher journey.

The interview was recorded all answers are in their own words. I’ve typed up almost as it is so it may jump around subject wise. I wanted it to be as unedited as possible.  So here I go with Jackie and John from John Hughes Butchers.

Let’s get started, we’re off.

Okay so the reason I want to do this is to gain some perspective from someone that sells meat for a living.
In relation to maybe to the vegan movement, environmental credentials and stuff like that but also we want to know more about the process as well. We also want to look at buying vegan for environmental reasons

A lot of vegan is processed isn’t it.

Vegan food is processed, and alot of vegans eat soya and rice, a lot of it isn’t over here,  it’s all grown abroad so that’s the eco system being stretched.

Do they (Vegans) have allotments, do they stick by veganism and have everything eco, like their soaps and creams or do they think it is a just a health kick just to be vegan?

For us being a vegan is the whole life style. I know I couldn’t do it. I’m not saying I never will but with such a low carbon footprint and a reduced meat intake I’m well on my way.

No, your the only ones

Well that needs working on 🙂

A bit of background

Lets just start right from the beginning, tell us about your butchers, your business who you are, you and John.

Johns been in butchery since he was 11. He worked in an abattoir that’s where he trained. Trained at 11 years of age, so John would know more about that, I’ve only been here the last 5 years. John will be more in depth on the meat.
It’s all local produce. We only try and buy British or Welsh because of the grazing on the grass. We buy everything and John cuts it’s down himself. He buys the carcasses, pigs, lambs, the bullocks. So they’re cut down here and put on the counter. We’ve been the butchers here in Pontyclun for 23 years.

We’ve only got a lifespan of 3 days, supermarkets have got a wider lifespan. You look at their sell buy dates you can buy something maybe on the 9th and it can be used by the 20th, we haven’t got that by law, everything got to be sold within 3 days.

Your meat is fresher then?  Yes!

Are the majority of customers local?

Yes, Pontyclun, Talbot Green, Llanharry, we get a lot of customers in the bad snow that use us, new customers from Llanharry who didn’t even know we were here. They use us when it’s bad snow, they use us for Christmas and they have used us for COIVID because we’ve stayed open.
And then our trade drops then. It’s used as a convenience for them when they can not get to a supermarket.

So would you say in some ways you also lose out to convenience when it is easier for people to go back to the supermarkets? When things are back to normal and they can just go to Tesco do you lose out then?

Do you know the average distance your meat travels to get to you?

We get our meat from an abattoir in Maesteg and St Fagans. The meat in Maesteg is mainly Welsh produce. Some from Hereford and Oxford.

Every bit of meat that comes into the shop is tagged and we know where it has come from.

So that’s not far at all, considering some meat is imported.

Yes – It’s mainly Welsh meat and if not Welsh, all British.

So – I’m assuming the people you get your meat from supply other butchers as well?

St Fagans doesn’t, St Fagans is only us.St Fagans, we know the farmer that looks after the cattle, we go and see the cattle, well, Covid we couldn’t but before that Brian would come in and say do you want to see that the cattle are ready and John would maybe say leave it another two weeks and then that cattle would get booked into Maesteg.

Maesteg will deliver all over Wales.

So which animals are we talking about?

Bullocks, pigs and Lamb. Chickens are from Severn Poultry over the bridge and they are all British chickens.

A Note From Us

Knowing that our meat is so local and cared for by farmers that the owners of the butchers actually know makes it all feel a bit less cold. Ultimately animals are being sacrificed for our consumption so it is important that we make educated decisions. From the research I have done cutting down on meat and swapping it for a smaller volume of higher quality local meat seems to be a big step in the right direction.
In Britain our cows are grass fed in fields and overall our beef farming seems to have a much lower footprint than much of the world. You can read more about farming British beef below.

If you would like to join our newsletter you can sign up by clicking this link and entering your email address.

We send out a newsletter every two weeks and it varies from eco tips, zero waste hacks, food waste, living more with less, recipes, food miles, saving money and so much more.

This site uses Akismet to reduce spam. Learn how your comment data is processed.